Why do the months of the year have different number of days? Why are there 28 days in February but January and March each have 31 days? It has been like this since 45 BC when the Julian calendar replaced the original Roman calendar. If there are 365 days in a year, is it not more ‘balanced’ to have 7 months with 30 days and 5 months with 31 days? Why not even have 13 lunar months of 28 days, giving 364 days and allowing one extra day for the New Year holiday? Surely there is a more sensible option than what we currently have?

And why does the New Year start at 1/1… meaning why not set Jan 1st arbitrarily to another day of the year? Perhaps at winter solstice 12/22 when the sun has reached its lowest point in the sky? Or on 12/25 when ‘on the third day’ the Sun starts to visibly move back up into the sky and the days begin to get longer again?

Note that the American system of noting date as mm/dd is being used and the reason for that will become evident.

No doubt these questions have occurred to everyone at some point in their lives… but quite likely have been written off as either pagan tradition or as some ecclesiastical ‘quirkiness’ introduced by the Vatican. Well we shall presently see why the current calendar is the way it is but first it is necessary to introduce some basic geometry that is not usually taught in school.

The Square and the Circle

The square and the circle are the two fundamental shapes in geometry. They can be drawn using the traditional tools of a ruler and compass. The square however is not a naturally existing shape and its intrinsic right angles suggest an unnatural or disharmonious aspect; this is how the esoteric traditions view the square. On the other hand the circle is a very natural shape and represents unity of form.

Great scholars such as Leonardo da Vinci understood the “Magnus Opus” to be an alchemical transformation, whereby the square is transformed to a circle of equal size… impossible using just ruler and compass.  This is called ‘squaring the circle’ and has traditionally frustrated both geometers and masons. The philosophical implication is that the alchemical transformation of sapiens from base to unity consciousness is beyond thought, and so the philosopher’s stone or holy grail became the missing link for the transformation from base lead into the finest gold.

While the square shape does not exist overtly in nature its existence is implied by the shapes and forms of terrestrial life… and not least the human being. Da Vinci’s ‘Vitruvian Man’ is a classic example with the outstretched arms defining the limits of both a square and circle.

Also the mathematical Fibonacci sequence applies a progression of squares to unfold a spiral form that is ubiquitous in nature. The numerical sequence starts with the numbers 1,1 and its progression is simply the addition of the previous two numbers.

And we will see that the relationship between the earth and the moon also squares the circle… and how this has found its way numerologically into the both the Julian and Gregorian calendars. 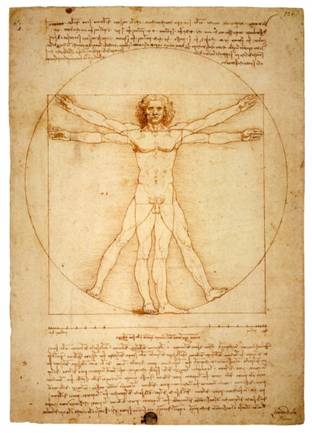 a) Leonardo da Vinci’s ‘Vitruvian Man’ illustrates how the dimensions of the human form ‘square the circle’; and b) the Fibonacci Sequence depicts a sequence of squares unfolding into a spiral in nature; though the square shape is not overtly present in nature its underlying form is inherent in the design.

Now let’s consider a square that has equal area and perimeter, as illustrated below: the only solution for this is a square with sides of four units. And now consider a circle that has equal area and circumference: the only solution for this is a circle with radius of two units. This circle fits perfectly inside the square… and this composite shape can be drawn easily with ruler and compass. It is unique in that BOTH the area and perimeter of the square are 27.3% larger than the circle. 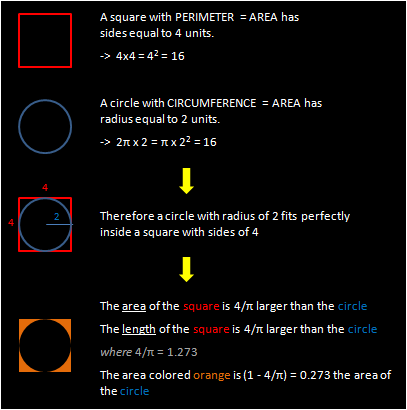 Uncannily these digits 2-7-3 keep recurring in other cosmic parameters:

– a circle within a square has both circumference and area 27.3% smaller than the square

– the lunar sidereal period is 27.3 days

– the background cosmic radiation is at 2.73 degs above absolute zero,

– the human menstrual cycle is 27.3 days

Geometry of the Earth and Moon

What are the odds of this? The earth orbits the sun and the moon orbits the earth; both orbits are reciprocals of each other and also encode numerically their relative size… that in turn reflects the intrinsic relation of the circle and the square. 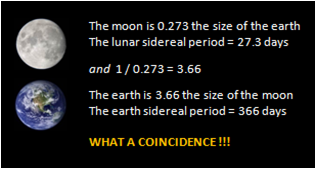 So by referencing the earth+moon against the earth we can square the circle as shown below. Note that 27.3% is very close to the fraction 3/11… so the moon is 3/11 the size of the earth.

If we now draw a triangle across the diameter of the earth and with its apex at the center point of the moon, then we get a replica of the Great Pyramid of Giza! The angle of this triangle is 51.85 degrees, or 51 degs and 51 minutes (51o51’) as per the standard notation.

The number 51 will also play an important role in the design of the Julian and Gregorian calendars. 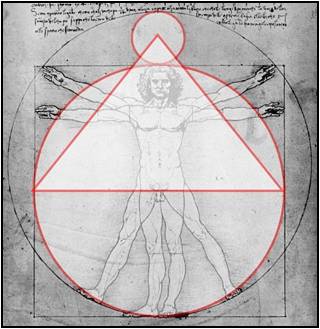 Da Vinci’s Vitruvian Man superimposed with the earth and moon.

To being with let’s relate the 365.25 days of a year to the 360 degrees of a circle. There is a school of thought that long ago the solar year was 360 days but that upheaval in the solar system affected this. So at first glance the current discrepancy is somewhat ‘annoying’. But we will see that there remains an intrinsic order to all of this.

The four seasons are based around the two solstices and the two equinoxes. These four points are referred to as the ‘solar cross’ when plotted as the sun’s movement through the sky over the course of a year.

If the solar year is 365 days then we would expect each quarter to be 91.25 days… the time between equinox and solstice and between solstice and equinox. However the earth makes a slightly elliptical orbit around the sun so the times are not consistent season to season, and vary slightly even year to year. The average dates are as follows.

Between each equinox and solstice are other events called the Sabbat and pagan cultures have traditionally celebrated these holidays more. A well known example in the northern hemisphere is the mayday festivity on 5/1 also known as Walpurgisnacht. These four holidays fall on the ‘galactic cross’ also known as the Cross of St Andrew that intersects the solar cross approximately mid-way. 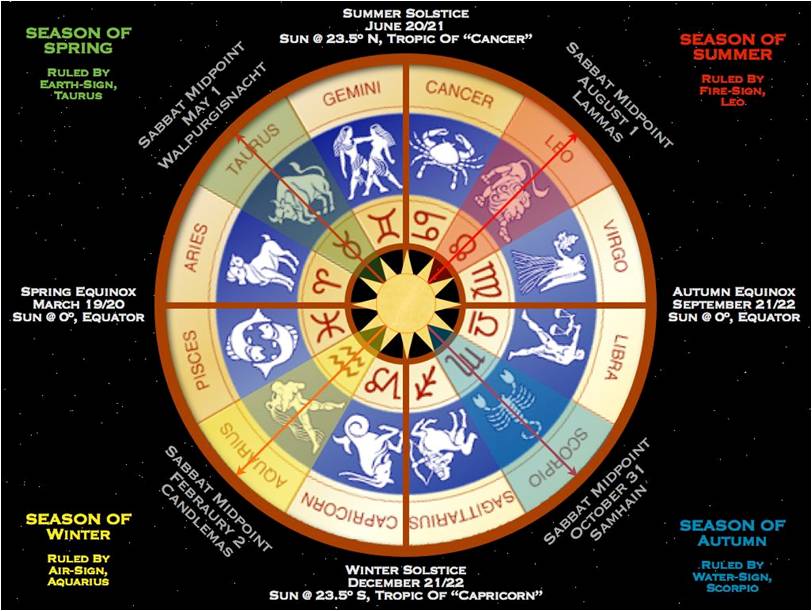 Superposition of the Solar and Galactic crosses depicting the holidays of the equinox, solstice and sabbat.

We will focus on the May sabbat since in the northern hemisphere this is the most significant pagan festival. At closer inspection 5/1 is not exactly midway between equinox 3/20 and solstice 6/21. In fact it is 42 days after equinox and 51 days before solstice! Actually not close at all! Why not???

The equinox 3/20 represents the transition between the dark and light season, and at the end of the dark season the sun is ‘crucified’ on the solar cross (in astrotheological terms) and then ‘resurrected’ on the third day 3/22 according to both pagan and Christian folklore. On the morning of the third day the full disk of the sun is observed to enter into the light season and is ‘reborn’. This is the correlation between scripture and the motion of the sun. (The Easter holiday however has been moved to the first Sunday after the first full moon after 3/20).

These numbers 42 and 51 also show up as the corner and cross-section angles of the Pyramid of Giza. They are also the angles (measured from horizontal) of a rainbow arc and its double. 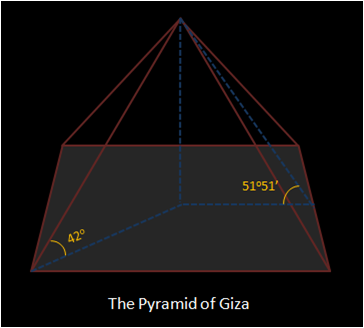 The relative proportions of the earth+moon radius and the earth radius.

So we have 51 days corresponding to the angle 51o51’. The interesting thing is that multiplying 51 by the proportion 366/360 (days in a year to degrees in a circle) we get exactly 51o51’ the angle of the Great Pyramid of Giza! It turns out that the extra 6 days in a year are significant after all. 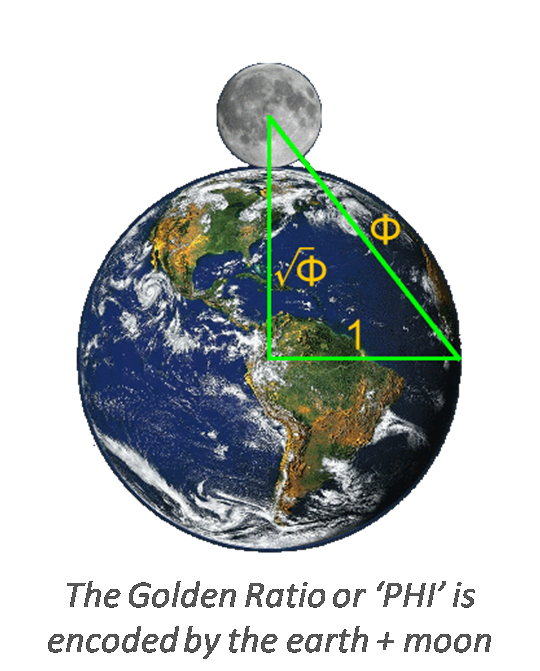 This angle of 51o51’ has even greater significance when you consider that it relates via basic trigonometry to the Golden Ratio or ‘Phi’ (an irrational number 1.61803…) that like Pi is fundamental to nature.

Phi is also the number the FIBONACCI SEQUENCE converges to when taking the ratio of each pair of numbers in the sequence. Phi is also the ratio of all distances within the pentagram. And phi is unique in that it has the same decimals as its reciprocal (1/1.61803… = 0.61803…)! 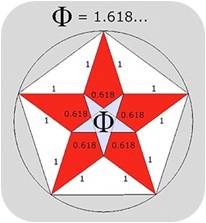 Numerology of the Calendar

This is where things become interesting. It is beyond the scope of this document to present the science and art of Kabalistic numerology. But suffice to say that certain numbers, and combination of numbers, are regarded as being auspicious or inauspicious. The purpose here is not to provide arguments for or against this practice, but to reveal the pattern of numbers and demonstrate that the makers of the calendar (the Vatican) take an active interest in the practice of such devilish ‘magick’.

The numbers we have seen in this document are mostly significant. The numbers can be represented in any format, be it a distance, angle, date etc. In this way we can identify a connection between the sabbat 5/1 being 51 days before solstice. This combination can be rewritten 51-51 without issue in the practice of gematria and this in turn relates to the angle 51o51’ in the earth-moon diagram. In this way everything is connected by number.

The following dates have esoteric and numerological significance. For this exercise we are only looking at the first half of the year.

In order for these dates to fall into place, corresponding with specific planetary or solar events, the calendar must be fixed. If February did not have 28 days then the 2/2 sabbat would fall on an earlier date. If New Year was not set at 1/1 then none of these dates would work out!

An interesting aspect of having New Year on 1/1 is that it is 6 days after 12/25 which is the true date when the sun starts its journey back up into the sky. By discarding these days in limbo, the number of days in the year becomes 360. This conforms nicely to 360 degrees in a circle and all geometers with OCD can finally have a decent night’s sleep!

The Resurrection of Christ falls on 3/22 as a solar calendar event – while in practice Easter falls according to the full moon, and another pagan ritual concerning the Babylonian moon goddess, Ishtar. Because we use a solar calendar, Christmas is a fixed solar holiday and Easter is a floating lunar holiday. The sun and moon (‘Solomon’) are hereby both celebrated.

The Season of Sacrifice

The 40 days from 3/22 to 5/1 are in pagan traditions called the season of sacrifice, from which the 40 days of lent were derived. However the 11 days from 4/20 until 5/1 the season are considered to be full on… with 4/20 being exactly a third of the way from equinox 3/20 to solstice 6/21. The date of April 20 has particular occult significance; it also happens to be the birthday of Adolf Hitler!

Let’s look at other multiples of 51.

The number 153 has some peculiar properties.

Artificial Intelligence and The Sex Bot »